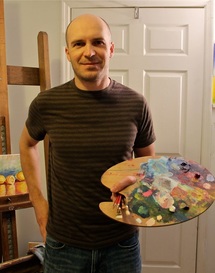 Veniamin Slobodenko was born in Georgia (one of the former USSR republics). When he was 13 years old, his family moved to Russia. At the age of 15, he attended art classes where he tried oil painting for the first time. He was enjoyed that experience even though he didn’t have good results. He felt that he had entered the amazing world of art. That was the moment when he became passionate for art. He wanted to enter art school, but it didn’t work out for him. He never got a formal art education. He tried to paint when he had the time, but he couldn’t focus on art because of school and work. Four years ago, he decided that, no matter what, he would spend more time focusing on art. Even though he didn’t have academic training, he learned and is still learning from past and present artists by observing their work.
His style is continuing to change and adapt because there are so many techniques that he would like to try. At this point, his work can be described as a balance between realism and impressionism, mostly focusing on the contrast of cold and warm colors. Sometimes he does experimental work, primarily focusing on color harmony.
Veniamin moved to the U.S. in 2012. He lives and works in Chattanooga.